Dedicated to the Service of our Customers for More Than 100 Years.

The Benton Ridge Farmer’s Mutual Telephone Company was founded in 1902 by Peter A. Kemerer and George W. Brown in Lima, OH. In the first years of the company, G.W. Brown served as president; P.A. Kemerer as secretary; Pete Baldwin as lineman; and Carrie and Molly Hughes as operators. Until about 1910, the central office for the Telephone Company was in the William Huffman building. From about 1911 until 1922, the central office was located at the Southwest corner of Main and East Streets. In 1922, the central office was moved to the Northwest corner of Main and Elm Streets and remained there until 1959.

In 1957, the company was changed from a mutual non-profit organization to the Benton Ridge Telephone Company, a for-profit corporation. In 1959, the conversion was made to dial phones and in 1960, direct long-distant dialing was installed. In 1967, the Telephone Company was awarded the AUTOVON contract and, three years later, began serving the U.S. Department of Defense. In 1971, the company extended its service area to Findlay, OH. In 1978, the company purchased the North Creek exchange, and the New Bavaria exchange in 1981. Also in 1981, Benton Ridge updated the AUTOVON equipment with a 2,000 line digital switch. The conversion to digital was completed in January 1988.

Aside from the telephone operations, Benton Ridge formed subsidiaries to provide additional services. In March 1983, the B.R. Cablevision Company began providing cable television service to the village of Benton Ridge and the surrounding area. In 1989, B.R. Security was formed to provide a Central Station monitoring service for alarm companies. WATCH TV was created in 1991 to provide wireless cable television to customers in Northwest and Central Ohio. Watch has expanded to residential and business Internet, voice and television services through Illinois, Indiana, Kentucky, and Ohio. Bright.net-BRT provides Internet services to Hancock, OH, and parts of surrounding counties. In 2004, Benton Ridge purchased seven towers from ComWavz, to further expand Internet services. All of these divisions are in accordance with the company’s vision of Total Communication.

Total receipts for the Company during the first years of operation were indeed, modest. Here, we can see that in 1905, the company operated on a little more that $450 in total revenues. At that time, the Company Secretary collected all of the fees for telephone usage. This money was turned over to the Company Treasurer every three months. Given the operating budget of the Telephone Company today, these cash receipts would only last a few hours!

Could this have been the first “telephone directory” for the Benton Ridge Telephone Company? This is a copy of the early line assignment records. When the Company first started, very few people had their own “private line”, something we take for granted today. Line assignment was more likely based on a person’s location in the area served by the early telephone companies. You will note that at least a couple of persons had a private line. Note also that the person having line #11 also had an extension in the barber shop. 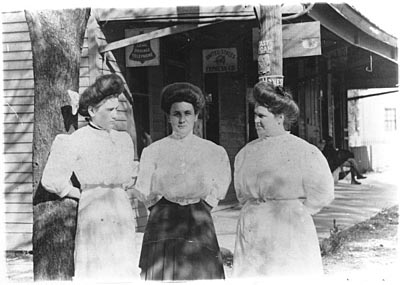 Operators from the Benton Ridge Telephone Company from the 1920’s.

This is the 1956 Benton Ridge Telephone Book. Notice that at one time, advertising space was sold on the phone book covers to generate additional revenues for a small, rural telephone company.